Hills on a bike commute journey can be extremely off-putting and actually make some people never want to ride to work. However, a hilly route does not mean you cannot bike to work – you definitely can, just with a few adjustments.

How to Bike Commute with a Hilly Route? Use a bike with at least 7 speed options (or 7 gears). Plan for the hills by wearing appropriate clothing that is light and breathable. Look at ways to take a change of clothes on your bike, the best is using panniers. Avoid carrying a backpack as this adds to strain and sweat (both on your back) – use a pannier bag instead. Allow yourself some extra time to go slowly up the hill and, if a really steep incline, consider getting an electric bike.

That said, it’s important to go a bit deeper into this topic to fully understand all of the points above, so let’s get into it right now!

Best Bike for an Uphill Commute

The best bike for an uphill commute is something that has at least 7 speed options, or gears, with the type of bike you ride not as important when going uphill.

I would recommend getting a suitable bike for your journey (think about terrain and distance) with as many gears as you can if you have lots of hills. I started bike commuting where I lived at the bottom of one big hill to get to my work, which was a 20-minute uphill ride with a few seconds of downhill. I had a 21-speed hybrid bike and it was fine for this. I am not sure I could have done it on a bike with fewer gears.

There are also lots of differing opinions on the type of bike that is best for a hilly commute.

Hybrid bikes are generally the best option for riding mostly on roads in urban settings as they are a very standard bike design with riders like bike commuters in mind.

Hybrid bikes also come with lots of gears, making them a good option for a hilly commute.

Touring bikes are a little heavier and are designed for longer journeys and would probably suit commuters with commutes over 8 miles or so, but may not be the best for extremely steep hills given the added weight they carry owing to the steel frame on most touring bikes.

That said, you may find that you prefer sitting while riding uphills and taking it easy and going a little slower, for which a hybrid with over 7 gears should be fine for you.

If hills are the major problem that is stopping you from bike commuting on a regular basis, or perhaps at all, then an electric bike is a fantastic option to help you.

These ‘ebikes’ will still require you to pedal but will offer a motor assist, making it much easier for you to climb hills on your commute and to get up them with less effort and strain.

The only downsides to an electric bike for a hilly commute is that you will need to make sure it is charged to be able to assist and that they cost a bit more, making it more of an investment.

With that said, if spending a bit more on a bike saves money on gas, parking or car maintenance in the long run, then it seems like a good investment overall for most people.

Get a Bike with Disc Brakes

As has been suggested online, a bike with excellent brakes is also really important for a hilly commute.

This is because if you have an uphill commute one way, that means lots of downhill commutes the other way!

Obviously, going downhill a lot will require a bike with excellent braking and stopping power, particularly if you are riding on a road.

Disc brakes are therefore a great option for bike commuters with lots of hills on their journey because they offer some of the best stopping power at an affordable price.

Remember that standard brakes might seem fine for general use, but on a wet, downhill part of your commute, having the extra feature of disc brakes will make you that much safer on the roads, especially in traffic.

Clothing for a Hilly Bike Commute

Clothing that is light and breathable is extremely helpful for a hilly bike commute as it helps to reduce the chance of you sweating from riding up a hill on your journey.

Work clothes from synthetic fabrics like polyester are to be avoided wherever possible as these keep your body warm and will likely cause you to sweat sooner.

Instead, look for clothing from cotton or other natural materials as these will feel more breathable and comfortable when riding on a steep hill.

I should note that almost all waterproof cycling jackets and trousers are made from things like polyester, but good quality items will be designed to be breathable, reducing the impact of this material. These outer garments will also not be so prone to making you sweat as they are further away from your body than your work clothes, so it is not as much of a problem to have synthetic materials in these clothes.

Use a Pannier instead of a Backpack

I use a pannier bag on the rear rack of my bike every day when commuting and it is probably the best change I made to my commute.

I started off wearing a backpack on my hilly commute but would always get to work with a massive sweat patch on my back, regardless of how fast or slow I went.

I later added a rear rack (or ‘pannier rack’) to my bike and bought some panniers. The difference was instant and fantastic.

Hills obviously will make your bike commute slower than going on a flat, but trying to ride uphill quickly to make up for this will result in you feeling much hotter and likely sweaty.

The easiest option is to allow yourself more time to get to work by leaving your home a bit earlier than you would normally.

This will allow you to go more slowly up any hills and not feel as hot, tired and flustered when you get to the top.

As an alternative to the above, you could also look into taking an alternative route to the one with the biggest hills. It’s probably unlikely that you will find a flat route, but you might find a route that means fewer steep hills or inclines.

This would again likely add to the time, so leaving earlier should help you to accommodate this.

You could also keep this longer but flatter route for days when you are feeling tired and might not otherwise want to commute by bicycle.

What gear is best for going uphill on a bike?

Lower gears on a bike with at least 7 speeds are the best gears for going uphill on a bike. This is because the lower gears allow you to travel uphill with less resistance. Riding in lower gears means that you will be pedaling more frequently in terms of revolutions, but this will help you to get up the hill, albeit more slowly than in a higher (but much more intense) gear. Contrast this use of a variety of gears to a single speed bike, which only has one resistance option for flat roads and hills, usually what would be a middle gear on most bikes – you will simply not be able to get up the hill and will have to get off your bike and push, which is not what you want!

What is the best way to cycle up hills?

The best way to cycle up hills depends on the type of riding you are doing but for bike commuters, it best to sit down on the seat and ride more slowly in a lower gear. As explained above, lower gears mean less resistance and an easier time getting up hills, while sitting means you are likely to take it fairly easy and go at a moderate pace.

If you take my advice and use a pannier bag, you might also like to ride uphill while in a more aggressive standing position on your commute.

This is a more intense workout for your legs and will get you uphill faster, but at the price of breaking a sweat, probably in your work clothes. However, you can easily switch between riding upright and sitting if you want a mixture of both speed and convenience.

Are hybrid bikes good for hills?

Hybrid bikes can be good for hills but it is more about the gears on the bike, the option of having a pannier fitted to the rear and your personal comfort that will determine whether a hybrid bike will be good enough for hills for you. 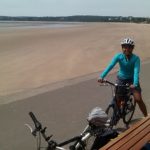 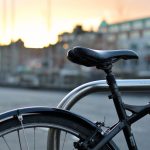 How to Plan a Bike Commute in 11 Simple Steps