I wanted to clarify this for other riders, and even for complete beginners because, when I was first getting into bike commuting, I was not sure exactly what a touring bike was. I was also unsure if a touring bike would be good for commuting on, so I thought I’d share what I found from talking to bike shop workers and friends who have touring bikes.

Quick answer: are touring bikes good for commuting? Touring bikes can be good for bike commuting if your journey is a bit longer than average and if you expect to have to carry lots of items on your bike. This is because touring bikes can carry more weight on the bike than any other type of bike. That said, they might not be the best bike for your commute depending on a few other points, as we’ll look at below.

OK, with the short answer done, let’s get started on more of the detail.

What is a touring bike?

A touring bike is a bike made for going on long-distance rides carrying large amounts of weight, hence the word ‘touring’! It is designed to have a very strong and sturdy frame, while also being able to carry a lot of bags on the front and rear of the bike. Touring bikes are ideal for those with a long journey and want a little bit more life than most other bikes as they are built for strength and durability, rather than speed.

Think of touring bikes as the mule of bicycle family (and I mean that in a good way!) given that they just keep on working in all conditions. They might not be the fastest, but a touring bike will get you, and all your gear, from A to B in a dependable and steady way.

How is a touring bike different to a hybrid or road bike?

To make a direct comparison between both hybrid and road bikes with touring bike, I’ve compiled some of the key similarities and differences between these in the sections below.

Remember that there are some variations in models of each type of bike, but generally, they are pretty standard in what they offer and come with as standard,  as summarised below.

Similarities Between a Hybrid and Touring Bike

Both have a sturdy frame and are designed for Practical use rather than high-speed.

Hybrid bikes and touring bikes can also both be ridden in in upright positions, although more on the slight differences there will be mentioned in the paragraph below.

Differences Between a Hybrid and Touring Bike

A touring bike is different from a hybrid in that it has drop handlebars, while a hybrid has usually only standard straight/flat handlebars.

This means you can choose to have a lower riding position on a touring bike than a hybrid, and therefore cycle to work that bit faster.

A touring bike will also come with mudguards as standard while hybrid bikes will often need these fitted as an extra.

Added to the rear rack, touring bikes will always have the fittings for a front rack to hold yet more panniers for those going on major rides around the country. Some hybrid bikes will have this option but not all and it might well not be advisable as it can throw out the ‘geometry’ of the bike.

A hybrid bike will often be a bit lighter than a touring bike as it is not made for the wear and tear of riding up and down the country on, fully loaded with bags!

A touring bike will generally be a bit heavier than a hybrid bike without any bags on it.

As mentioned above, this is because touring bikes are meant to carry a heavy load for those cycling long distances with heavy bags.

A touring bike will generally also have a more comfortable saddle and grips as standard, again because comfort on longer journeys is essential.

Similarities Between a Road Bike and Touring Bike

The main similarity between a road bike and a touring bike is that both have the same handlebars and usually very similar gears.

This means that you can ride a road bike and a touring bike in an upright or more aerodynamic lower position for speed.

Otherwise, that’s about all the similarities I can think of!

Differences Between a Road Bike and Touring Bike

A road bike will be a lot lighter than a touring bike,  mainly because it is not designed to carry any kind of weight other than Rider.

A road bike is also designed for speed and will get you to your destination on your commute a little bit quicker than a touring bike.

However, a road bike will not come with bike commuter essentials like mudguards, fixings for a rear rack, or generally a comfy seat.

Although it is possible to have a rear rack fixed to a seat post on a road bike, the weight that this can carry will be much less than the weight that you could carry in bags on a touring bike.

The tires on a touring bike are also wider and more different types of terrain than the tires on a road bike.

What features make a touring bike good for bike commuting?

Touring bikes are good for commuting in that they suit those with a ride longer than perhaps 5 miles.

I say that because a commuter on a touring bike can then easily do long-distance commutes with lots of bags and feel comfortable.

Touring bikes are also pretty reliable on most types of terrain, while both hybrid bikes and road bikes and much more comfortable on cycle paths and urban environments.

That is not to say that touring bike is like a mountain bike, it most certainly is not! It’s simply that touring bikes have a little bit more of a broader scope than the other two types of bikes mentioned in this post.

While they are tucked down low with their head out of the wind, I am stuck in my upright position on my hybrid bike with the full force of the wind in my face, making my journey to work that bit slower!

So that just about rounds up what makes a touring bike good for commuting.

The last thing to point out is that touring bikes can really go to the ends of the earth, so if that sounds like your cup of tea outside of work, then that is a huge value-added incentive to get a touring bike for your ride to work!

Now let’s have a look at the not so good aspects of touring bikes for getting to work.

What are the downsides to commuting on a touring bike?

Since touring bikes weigh a little bit more, they are not ideal for those with a shorter commute, let’s say less than 5 miles.

This is because the benefits of of the stronger bike are less likely to be felt on a shorter journey, where as the added weight certainly will be felt at that kind of short commute.

This is likely because the frame is made of stronger material and that the bikes come equipped with more accessories out of the box.

However, if you are planning to leave a touring bike outside your office all day, the added value might be one negative point to consider for commuters.

If you are really worried about your bike getting stolen, then a hybrid bike might be a better option for you as the same price of a hybrid bike should mean that you will get higher quality components.

But again, when comparing prices of a hybrid bike to a touring bike for your commute, think about the added features that a touring bike comes with, as outlined above.

Summary of Touring Bikes for Commuting

I feel that touring bikes are best for those with a slightly longer ride, say more than 5 miles to get to work.

They’re all so good if you have a safe place to park your bike outside of work.

The other major advantage of touring bikes for commuting is that they are also fantastic for those who would like to ride in their free time on longer journeys.

Have I missed anything about touring bikes for commuters?  If so drop me a line on Twitter @stephenbeale and tell me! 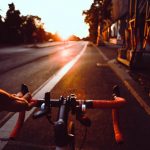 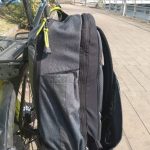 How Do You Use a Rear Bike Rack? (Beginner’s Guide) 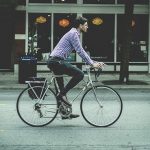